When Comixology decided to up prices by 66%, just as we were all locked in our houses for an undetermined time I and many others vowed to go elsewhere for our digital comics fix. One great place to go is Comichaus, who offer an all-you-can-eat indy comics buffet for a low monthly sub. Comichaus have challenged locked-down readers to review one of their comics a week via the Awesome Comics Podcast facebook page.

First up is Turkey Grove Farms, a light-hearted look at evolution, cannibalism and factory farming.

George Orwell’s novel 1984 is maybe the best known expression of his critique of totalitarianism, but not far behind is Animal Farm. A metaphor for the Stalinist degeneration of the Russian Revolution, it saw farm animals overthrow the corrupt and drunken human farmer and run the farm themselves. But ultimately “some animals are more equal than others” and rule by men or pigs was much the same.

Turkey Grove Farms is a humorous take on a contemporary Animal Farm. Rather than the evils of Stalinism it skewers the stupidity, greed and hypocrisy of some people. Turkeys decide to stop voting for Christmas and led by the ruthless Gobbler instead turn their guns on the hillbilly Bernard Matthews types running the farm. They don’t exactly stop production, but let’s just say that the Turkey Twizzlers may have some ingredient substitution.

The cartoony drawing style of JC Grande is perfectly suited to the screwball story which would have been at home in the likes of Viz, Oink or Mad Magazine in the past. Indeed I felt that it would  work better read in small episodic chunks rather than in collected or TPB format.

You can get Turkey Grove Farms from Comichaus and bookshops – More details at https://markosia.com/ 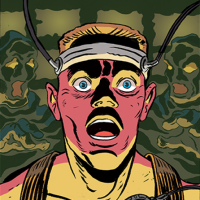