Lee is a fixer. But someone is trying to fix him. His daughter has been taken and he will have to fight to get her back. One problem. He has been spiked with a mind altering synthetic drug. What does the drug do? Depends on who takes it. For Lee it pitches him into a psychedelic nightmare of memories, violence and fear. Lee has not been a good man as he tells his ex – “I’ve never been anyone’s good guy, ask around”. But his shot at redemption is his love for his daughter and it is slipping away.

The first thing I liked about The Edge Off is that it is a work that can be done best in the comics medium, it is made for comics. An entire movie from the perspective of a central character tripping off his head on mind altering drugs? A tough sell. But in comics that can work. 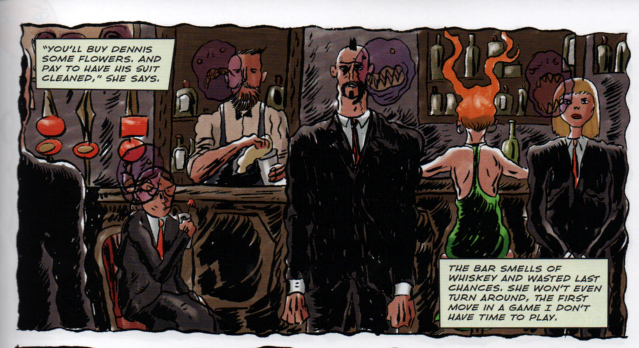 Fraser Campbell has avoided the easy narrative. Sure there are gangster cliches but there is something else going on. Just what is the drug doing to Lee? Is any of this real or is he reaping the consequences of a life of drug consumption? Is his own penchant for self-destruction to blame?

Iain Laurie is the perfect artist to capture this trip. To me his style is strongly reminiscent of German artist of the Weimar Republic George Grosz. Grosz represented the underbelly of Berlin through his weird and sometimes grotesque characters from high society and low life. He exposed the hypocrisy and corruption of the wealthy and the degradation of the poor in works like ‘The Pillars of Society‘ (shown on the left) – he painted a picture of a society facing chaos and tension, sounds familiar?

One could also point to some of the artists from comics itself. Jim Steranko’s work on Nick Fury – Agent of Shield in the 1960’s for example. Psychedelic but action packed.

If Dadaist gangster action comics are your thing check out The Edge Off. The Kickstarter came with bonus covers including the stunning one from Frank Quitely you see here. I loved it, but be warned you’ll need to read it more than once.